I finally got my results back from the RET mutation test. This test determines if my cancer has a common mutation that would qualify me to get into a clinical trial and access to the most-bestest meds. Once again, my cancer decides to follow its own path and go against the odds. I do not have the more common RET mutation and therefore do not qualify for the clinical trial. I had about a 70% chance of having the correct mutation. But, nope. My cancer is unique and rare, like a pretty little butterfly that is fluttering around destroying me from the inside. Medullary Mothra Cancer!

Getting into the trial would have been ideal, but I do have other options. Although, those options are becoming less and less. There are 4 or 5 other medications that MIGHT work but have less of a chance of success (less than 50%) and the side effects are much worse. Since these other drugs target a wider range of mutations, they also do more damage to your system in the process. I was also very concerned that the other drugs wouldn’t be covered by my insurance. Good news, as of right now, it looks like this next drug will be covered! Yay!

So, later this week I’ll start on Cometriq. A wonderful little poison pill that you shouldn’t touch with your bare hands, but totally fine to toss in your gullet. The side effects are pretty fun because they basically amplify the worst of my current symptoms. More fatigue, more dizzyness, more nausea, more upset stomach – and bonus I’ll probably have dry/itchy/chapped palms and feet. Nice and rosy, just in time for the holidays!

At first, it’s going to be pretty miserable. But, if it works, this drug could start to shrink the tumors and give me some relief. Eventually, the side effects won’t seem so bad because I’ll have fewer symptoms from the cancer itself. Which could be very good. If the drug works REALLY WELL, there is a slight chance it will shrink the tumors enough to allow for pinpoint radiation and/or surgery. As much as I would have liked better treatment options, it will be nice to attempt treatment of any kind. Fingers crossed. Also, if I had gotten into the trial I would have had to switch to a different hospital and whole new team of oncologists. So at least I’m glad I get to stick with my current team.

Side note: People have asked me why they don’t use chemo to treat my cancer. For my particular cancer it’s has a very low success rate and the side-effects are awful (as we all know). My doctor said she has only recommended chemo to one thyroid patient in her career and it was purely as a last resort.

I wrote a post before about accepting my new limitations and how I’m not the person I used to be prior to cancer. Well, I just reached a couple of new really terrible milestones.

I’m no longer able to perform my show (aka I can longer do my job, aka I can’t make money, aka I feel like a useless human). I just finished a few more performances this weekend and it was tough. It has become very clear to me that I cannot keep it up. I’m crossing the line from fighting through my struggles to being irresponsible with my health. I have one more show that I’m performing with my brother on New Year’s Eve. Performing as a team (not just a solo act) gives me more breaks and I’m hoping to show up one last time and put on a great show.

BTW – have I mentioned how amazing and supportive my brother has been through this process? We have performed as a team for over 25 years and he has always been there for me. He has done so much to help me finagle through these last few months, and just take on a little extra burden to make shows a little easier for me. Thank you, brother. 🙂

I still have performances scheduled for the Spring and Summer, and I’m hoping that over the next month or two my treatment will start to work and I’ll be able to perform again. But it’s very strange to think that these may be my last shows.

Another crappy milestone to report. It’s finally gotten to the point where I can’t safely drive a car. My lightheadedness has made driving a little tricky over the last month. I would have to plan my vertigo meds ahead of time to make sure I felt good enough before hopping into the driver’s seat. Those drugs are becoming less and less effective and now I’m a real risk of passing out. After discussing this with my doctor she strongly recommended that I stop driving altogether. If I’m sitting still, it might not be much of a problem, but if I turn my head quickly to check a mirror or blind spot, it could put temporary pressure on my blood vessels and knock me out. Instant rear-naked-choke.

This really stinks. I felt skeptical about a drastic decision to not drive. But I learned my lesson very quickly. Last night (only hours after my doctor telling me not to drive), I drove to my friend’s house for a Christmas party. I gave it a lot of thought and decided if I was careful I’d be ok. Then I’d consider driving less and less to adapt my schedule. Well, I promptly drove up to my friend’s house and backed straight into his car… In my attempt to not crane my neck (not pass out) while backing up, I didn’t get a good view behind me and drove the back of my car directly into the front of his car. Sorry, Scott. 🙁 I felt like a complete idiot.

I guess in some ways I’m lucky. I was feeling very stubborn about not driving. Not being able to drive myself further solidifies the idea that I can’t travel and perform my show. I can’t drive to the shows, and I can’t do the shows. I also can’t run errands, bring my kids to school, or go to doctor’s appointments. I also realize the immediately added burden this puts on Josephine. She’s going to have to do a lot more driving to make up for my inability.

So I was trying to convince myself that I COULD drive and it would be fine. The universe decided to slap me in the face and say, “NO.” I’m lucky that I only hit my friend’s car, and I didn’t run into a pedestrian. Or worse yet, I could have passed out driving 75mph down the highway. I am not what I was. :/ No matter how much my brain thinks I’m the same person with the same abilities. I’m just not. And it sucks. So now I can’t drive, and I can’t work.

I’m going to take the next couple of months trying to get better. I guess? People tell me to keep fighting, but I often don’t see the fight. If by fighting you mean that I keep waking up every day and doing my best to still be a good father, brother, partner, son? Then yeah I guess I am. But cancer has the jump on me and it’s dragging me wherever the hell it wants at the moment. I wish I could embrace this time as a little mini-vacation, but I think we can all agree that’s not what’s happening. And frankly, not working is really hard for me. I want so much to feel productive and contribute. My biggest fear is becoming a burden to those I love. Thank you all so much for your continued support.

Getting baseline labs today, before I start the new medication. Then I’ll be getting labs again before I leave to Maine at the end of the month to make sure I’m ok to travel. Then labs every two weeks to monitor my levels. In about 6 weeks, we’ll meet with all the doctors to see if the drug has been effective. If not, then we do it all again with the next drug. 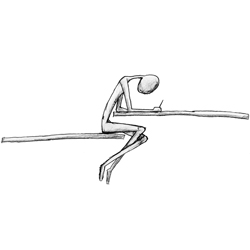